With her sixth release–Miracle of Life–Laughlin showcases her talent, polished technique and insight as a composer, lyricist, and producer. This is Jean's fifth collaboration with gifted arranger and co-producer Jim Martin.

There is a wonderful group dynamic between Jim and Jean and co-producer/sound engineer Freddie Breitberg which helped create an album full of warmth and love.

Adding to the mix, Jean is backed by a full orchestra, including top notch Chicago jazz musicians whose tasteful and inventive improvised solos enrich each piece. A masterful string section completes the orchestra which, with Jim's superb charts, help make Jean's music come to life. Her ballads, which range in genre from jazz to Broadway musical to cabaret, touch on the everyday challenges of our lives.

In her big band jazz tunes, she shows us her sense of humor as she contemplates life's absurdities. 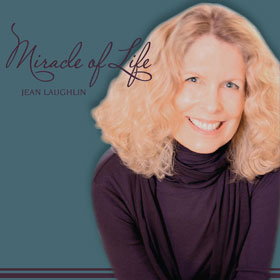 Jean Laughlin, who started singing music from an early age, discovered her skill as a songwriter in the 1990s. Miracle of Life is her sixth recording as a leader and features her in prime form, both as a vocalist and as a composer.

If this were a different time period, say the late 1950s, Jean Laughlin would be a cinch to be signed to the Capitol label, both as a recording artist and as a staff writer. But since the music world is much different today, she is an independent artist who should be much more widely heard. Miracle Of Life finds her singing 11 of her originals, and several deserve to become standards.

Ms. Laughlin's lyrics are often philosophical and filled with worthy messages. Her melodies, which can work in both jazz and cabaret settings, are often memorable. And her voice is quite expressive, whether on swingers or ballads. Her confident delivery and wide range allow her to easily make interval jumps and her voice is so clear and attractive that one never has difficulty understanding the words that she sings.

Miracle of Life, which features the singer in several different settings with a rhythm section led by pianist Frank Caruso, up to seven horns (with tenor-saxophonist Mark Colby and trombonist Tom Garling taking solos), and a string section on six of the songs, is full of variety. The opener, "What's Wrong With Being Lazy", which is about the joy of relaxing, is a highpoint but every selection is worth hearing. Other highlights include the pretty ballad "Blue", the upbeat "Fly Away With Me" (which has the singer overdubbing in spots to form two harmonized voices), "Brave" (a ballad worthy of Barbra Streisand), the celebratory "Smile", "Here And Now" (about the importance of letting go of the past and making every moment count) and the swinging Work In Progress. Throughout the set, the inventive arrangements of Jim Martin are a major plus.

Fans of high-quality singers, swinging numbers and heartfelt ballads will definitely want to discover Jean Laughlin and will certainly find Miracle of Life to be quite enjoyable.

With all the confidence of a seasoned professional, Jean Laughlin delivers her sixth album Miracle of Life with polished gusto, yet remains as inviting as a threadbare recliner. Laughlin is an immensely talented singer, invoking a range of emotions from mournful to playful with ease. Her lyrics are easily accessible and avoid cliché. Mix these elements together with the feel-good song styles of light jazz and Broadway and an easy listening masterpiece is produced.

Laughlin shares production credits with long-time collaborator Jim Martin who artfully arranged the tunes and employed many of Chicago’s hottest jazz musicians to bring them to fruition. Freddie Breitberg engineered and mastered the album ensuring each song glistens with rich, polished warmth. The opening number, “What’s Wrong With Being Lazy,” is a delightful satire about how ludicrous the rat race can be. Laughlin’s animated vocals are supported by the easy-going walking bass and casual, trilling piano. Frank Caruso on the keys is a staple throughout the album and in this particular number makes good use of the sustain pedal to give the piano a full tone, similar to the musical statements of Vince Guaraldi. The horn section has a nice blend with its punchy interjections and tenor saxophonist Mark Colby solos in the bridge. He plays fine, but the solo itself seems a bit out of place in a “lazy” song. Colby makes a more dynamic statement in “A Work in Progress.” This upbeat toe-tapper features more great horn work both in the solos of Colby and trombonist Tom Garling and throughout the song as the winds add ornamentation to the verses. 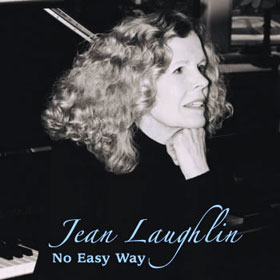 No Easy Way is a noteworthy release by Chicago jazz singer/songwriter Jean Laughlin, who is known for her broad vocal abilities and incredibly personal style. The writing is skillful and intelligent with fresh, clever arrangements.

She is backed by an incredible orchestra of talented musicians featuring brilliant soloists and swinging horn sections. The rhythm section is fabulous, setting up and emphasizing the ensemble figures with ease while also providing wonderful support throughout.

"Open" is a sincere and genuine opener with honest lyrics and Laughlin singing straight from the heart. Another heartfelt track is "Moment to Moment," which not only touches on the struggles of everyday life, but also offers inspiration. Her personality and individuality shine through on each tune, from her fun sense of humor on "Party Down" and "Lookin' at the Downside" to her warm, smoky style on the ballads "Sad Eyes,", "Cast Away," and "Home ( a lullaby)." One ballad that really stands out is the touching "Friendships Broken," featuring an illustrious string arrangement and passionate vocals. Another excellent track is the lively "Simplify," with her vocals dancing atop the rhythmic figures of the horn section and Laughlin again showcasing her humorous side.

This album is highly recommended for any fan of adult contemporary vocalists and/or big band music.

"First Class"
Author: JavaMan - Tim Taylor
I had a referral to check out Jean Laughlin's music. I ended up purchasing 2 of her three available albums and have heard the sound bytes on her third. I am stunned at the quality of the Music, The lyrics, the musicians and the mixing in the production. There is an eclectic combination to the tracks that had me wondering what's the next track going to be like? The music was pleasing, soothing and some big band thrown in at times. The orchestral sound is thrilling as well. Great Performance. I hope for more! JavaMan in Portland, Ore.

What Am I Looking For? 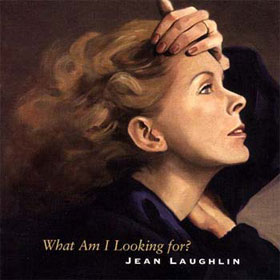 Jean Laughlin's "What Am I Looking For?" is a telling and engrossing jazz collection that is sure to uplift, inspire, and most importantly, entertain. Laughlin's smooth, controlled, inviting timbre connects with listeners on a personal level.

"Take a Risk" touts all of the features that make this album memorable–a captivating big-band musical platform, a well-written motivational theme, and a stunning vocal performance. "Don't be Afraid" places the limelight on Laughlin's comforting voice and takes on a more easy-listening vibe. Furthermore, "It's O.K. to Disagree" really shines in the area of instrumentation, displaying remarkably fitting and unforgettable brass and woodwind arrangements.

Polished to perfection by top notch production, fans of jazz and easy listening will discover pure bliss with this winsome collection.

"First Class"
Author: JavaMan - Tim Taylor
Jean's music grips me each time I hear one of her songs. I feel the emotion and passion coming out of her with her lyrics and melodies. The words are reality of someone who has experienced life's up and downs. Jean is backed by some high power musicians and technicians to put out some of the highest quality music I have heard in a long time. 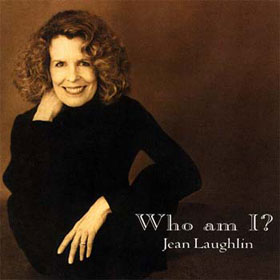 "The Story of My Life"
Author: An Atlanta fan remarked
The first time I heard Jean's CD "Who Am I?", I felt that she had set the story of my life to music.

"I am stunned at the quality of the Music, The lyrics, the musicians and the mixing in the production. There is an eclectic combination to the tracks that had me wondering what's the next track going to be like?" ~ Tim Taylor, Portland, OR

"Put it on, listen, wallow, float – and let yourself be carried off into the further reaches of you imagination. You'll enjoy the journey." WARNING: You may not want to come back." ~ Martin Smith, New York, NY

"Her voice is as rich as a buttery chardonnay. Her lyrics reach into the heart and soul of Jazz lover's everywhere." ~ Ruth Hutchinson, Milwaukee, WI

"Jean's songs are like a self-help book put to music. I pop What Am I Looking for? in the CD player, turn it up, and dance around while I clean to jazzy affirmations such as Nobody's Perfect or Cry as Jean soothes the painful realities of watching my kids grow up in 'Be A Man'. I call it my 'Jean Therapy'." ~ Teresa Matteson, Corvallis, OR